It is an effective way to coordinate and promote production and marketing in agriculture... Read more

QE is an aspect of quantum mechanics that makes phenomena such as quantum teleportation and super-dense coding possible... Read more

The treaty was proposed by the United States of America in 1955 and it was signed in 1992... Read more

The Ghats act as a barrier and intercept the rain-laden south-west monsoon winds during late summer... Read more

Nominal GDP growth does not take inflation into account and so is higher than real GDP growth... Read more

1. Scientists of S. N. Bose National Centre for Basic Sciences (SNBNCBS) have developed a protocol to find out the possibility of the presence of a pair of electrons in the ‘Quantum Entangled(QE) state’.

2. SNBNCBS is an autonomous institute of the Ministry of Science and Technology.

3. This will give information about the potential safe use of electrons as resources for facilitating quantum information processing tasks.

1. QE is an aspect of quantum mechanics that makes phenomena such as quantum teleportation and super-dense coding possible.

2. Quantum teleportation is a process in which quantum information can be transmitted between two locations using previously shared quantum entanglement between them.

3. QE is the physical phenomenon that occurs when a pair or group of particles is generated, interact, or share spatial proximity so that the quantum state of each particle of the pair or group cannot be described independently of the state of the others. 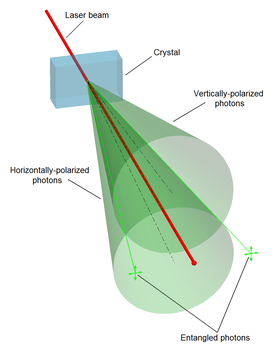 4. An entangled system is one whose quantum state cannot be factored as a product of states of its local constituents.

5. It means they are individual particles but are an inseparable whole. In entanglement, one constituent cannot be fully described without considering the others.

7. But entanglement is fragile and is easily lost during the transit of photons through the environment. A photon is a tiny particle that comprises waves of electromagnetic radiation.

1. Verification of entanglement requires the use of measurement devices. But these devices may be hacked or compromised.

2. Device-independent self-testing (DIST) method can be used to overcome such a possibility.

3. This method enables the verification of entanglement in an unknown quantum state of two photons without having direct access to the state.

4. The theory relies on the application of the quantum uncertainty principle while implementing full device independence is a difficult task.

1. It describes the advanced properties of nature on an atomic scale.

2. Quantum mechanics is the only theory that can reveal the individual behaviors of the subatomic particles that make up all forms of matter.

3. Quantum mechanics has strongly influenced string theories, candidates for a Theory of Everything.

4. It is also important for understanding how individual atoms are joined by covalent bonds to form molecules.